What you need to know...

Do I need a visa to enter Uganda?

Yes. If you’re entering Uganda as a tourist, you have to obtain a tourist visa at a Uganda embassy/High Commission or consulate in your country. Alternatively, you can purchase one upon arrival at Entebbe International Airport or a border entry point. A single entry tourist visa costs US$50 per person. The visa gives you a 90-day stay in Uganda.

What is a single entry tourist visa ?

A single entry tourist visa is a tourist visa that permits a person entering Uganda as a tourist if he or she does not intend to visit other East African states on the Uganda visa.
In case a person intends to visit Kenya and Rwanda in addition to Uganda in one go, he or she may opt to purchase an East Africa Tourist Visa instead of a single entry visa. This visa costs US$100 per individual and allows a 90-day multiple entry to Uganda, Rwanda and Kenya.

Can I use my credit or debit card in Uganda?

Yes, but there are few banks in Uganda which accept credit and debit cards and they are located in Kampala city and some urban areas. Plus, there is a limit to daily withdrawals of about USD 300.
Payment by credit or debit card in Uganda can attract additional charges of between 5–10%, occasionally more. Do check with lodges and restaurants in advance, if you plan to pay by credit or debit card. Alternatively, you may contact us to assist you with that.
We advise you to carry some cash. US dollars, British pounds and Euros are easy to exchange in Uganda. However, for some expenses, like the payment of a tourist visa at the airport/border, it is easier to have dollars available. It is often possible to pay for tourist activities with US dollars.
Please note: US dollar bills printed earlier than 2006 are NOT accepted in Uganda. Exchanging low denomination dollar bills (anything less than a USD100 bill) attracts a lower exchange rate.

Are travelers cheques/checks accepted in Uganda?

Travelers cheques/checks are no longer accepted in Uganda.

Is MasterCard accepted in Uganda?

Very few places in Uganda accept MasterCard. In addition to cash, we suggest you bring a Visa credit or debit card.

How much should I tip in Uganda?

You do not have to feel compelled to give a tip, but should you desire to express gratitude for a service rendered or just to show some love, USD10 per day should suffice for your safari guide. You may also want to tip any amount to a waiter or waitress in a hotel, or a vendor in a marketplace.

What is the best time to travel to Uganda?

Officially, Uganda’s dry seasons are from December/January through to mid-March and from June through to mid-September. These dry months are the most popular with tourists, with July and August, Christmas and New Year being the peak seasons.
However, if you want gorilla trekking, permits are easier to obtain during the wet seasons.
Like the rest of the world, the East African climate is changing, making it more difficult for us to predict the weather during your safari. However, the temperature is generally pleasant throughout the year. During the day, the temperature averages between 23°C and 27°C, although in some places it can drop to between 12°C and 18°C at night.

Are vaccinations required for my Uganda safari?

A number of different vaccinations are recommended and/or required before entering Uganda. A certificate proving you have had the Yellow Fever vaccination is mandatory for entry into Uganda. Proof of a negative coronavirus test result, which must have been taken within 72 hours before entry into Uganda, is also required. Immunizations against DPT (Diphtheria, Polio, and Tetanus) and Hepatitis A are recommended.
Besides bringing mosquito repellent, we also advise you to take malaria ‘prophylactics’ (preventive medication) while in Uganda.

Will I get sick when I’m in Uganda?

You are unlikely to fall sick while you are in Uganda but do take all recommended preventive measures. If you take any regular medication, please bring it with you.
Take your Malaria medication as directed – before, during and possibly after – your visit to Uganda (depending on the Malaria prophylactic you take).
Although HIV/AIDS infection rates are lower than many countries in Africa, the prevalence of HIV/AIDS infection is certainly higher than in most Western countries. Please do not engage in risky sexual behavior while in Uganda.
Uganda travel advice: safety information for travelers to Uganda

Is Uganda a safe country for tourists?

Yes, Uganda is very safe, and secure. The crime rate is one of the lowest in Africa. The country is also ranked among the most hospitable and most welcoming of foreigners in the World. Xenophobic incidents are almost unheard of. Uganda is an open society and it is easy to obtain any information from any stranger.
The border areas with Rwanda and the Democratic Republic of Congo remain stable and all National Parks and wildlife reserves are well protected by the Uganda Wildlife Authority’s park rangers. There is also a Police force dedicated to the safety and security of tourists.
If you are unsure about the safety of travel to Uganda, please contact Vuga Tours & Travel.
Your travel insurance company or foreign office may offer information about travel to Uganda. However, our experience shows that these bodies sometimes give out misleading travel advisories, which are sometimes not grounded in facts.
Your safety is our absolute priority and you can rest assured that we will always give you the best travel advice.

Where are the most popular parks in Uganda located?

Is Kampala a safe city for tourists?

Kampala is one of the safest capital cities in (East) Africa – although, as anywhere else, petty thieves sometimes steal phones and other valuables when left unattended. Your guide will give you all the information you need to make sure your trip is safe and incident-free. Feel free to ask questions!

Can I do the gorilla trekking in Uganda?

If you are interested in a mountain gorilla safari in Uganda or Rwanda you are required to buy a gorilla permit well in advance of your trip. As only eight people are allowed to visit each gorilla group per day, the demand is usually high. Vuga Tours & Travel is happy to book your gorilla trekking permits and to organise your gorilla safari.
To buy your gorilla permit, you will need to furnish us with your full name, nationality, passport number, preferred date of trekking and money for the gorilla permit. The minimum age for trekking the gorillas is 15 years. Because trekking may entail walking long distances and hiking, a certain level of physical fitness is needed. Plus, if you become unwell, you may not be allowed to trek.

How can I pay for my safari?

Once you have confirmed the itinerary with us, you will be asked to pay a deposit of 30% of the total cost. Money for the gorilla permit must be paid for in full separate from the deposit, at the time of booking. Note that availability of accommodation and permits is not guaranteed until officially confirmed by Vuga Tours & Travel. Accommodation, permit and activity reservations will be made as soon as payment has been received on our account.
For your convenience, the balance payment of 70% should be settled before the start of your safari. We accept payment by VISA credit or debit card (please include 5% service charge) and bank transfer in either dollars or Euros to our bank account in Uganda. Please note that all bank charges are at the expense of the client.

Uganda Safari accommodation falls into three categories: budget, mid-range, and luxury, and is graded based on varying levels of comfort and amenities.
All lodges are carefully selected and frequently visited by Vuga Tours & Travel staff, to monitor quality and service levels. The majority of safari lodges and hotels are small-scale, offering a unique location and ambiance.

What vehicles does Vuga Tours and Travel Ltd use for safaris?

We have different types of vehicles to cater for the needs and comfort of clients. We have vehicles for few individuals and large groups, and vehicles for all terrains. We always ensure that our clients have enough legroom and luggage space; plus, we ensure that each client has a good view of the environment while travelling.

I am travelling alone. Can I book my safari with Vuga Tours and Travel Ltd?

Yes, you can and you’re very welcome!

What is the maximum number of people in a group safari?

We offer tailor-made safaris for any number of participants. And, the price payable by an individual reduces significantly with the size of the group.

What is included in the price of my Uganda or East African safari?

Vuga Tours and Travel Ltd prices are inclusive of:
• ground transport in a comfortable four wheel drive (4WD) safari vehicle
• a visit to all places detailed in the programme
• the service of an experienced English speaking driver/safari guide
• National Park entrance fees
• activities as detailed in the itinerary (except for those that are marked optional)
• overnight in the named accommodations, based on sharing a twin or double room
• full board (breakfast, lunch, dinner)
• 2 litres of bottled mineral water per person per day while travelling in the VTT Vehicle
• government taxes
• park ranger fees

What is excluded in the price of my Uganda or East African safari?

VTT prices do not include:
• international flights
• tourist visa (available at the airport)
• meals and snacks that are not mentioned in the itinerary
• beverages (other than the bottled mineral water provided in the safari vehicle)
• tips and gratuities for safari guides and/or park rangers
• laundry
• gorilla trekking or chimp trekking permit
• optional activities that are mentioned in the program
• items of a personal nature (toiletries, camera batteries, souvenirs)
• travel insurance
• international payment transaction costs
In most cases, we will specify the extra charge of optional activities in your itinerary. If not, or if it is not clear to you, please contact VTT so we can confirm any additional fee(s). 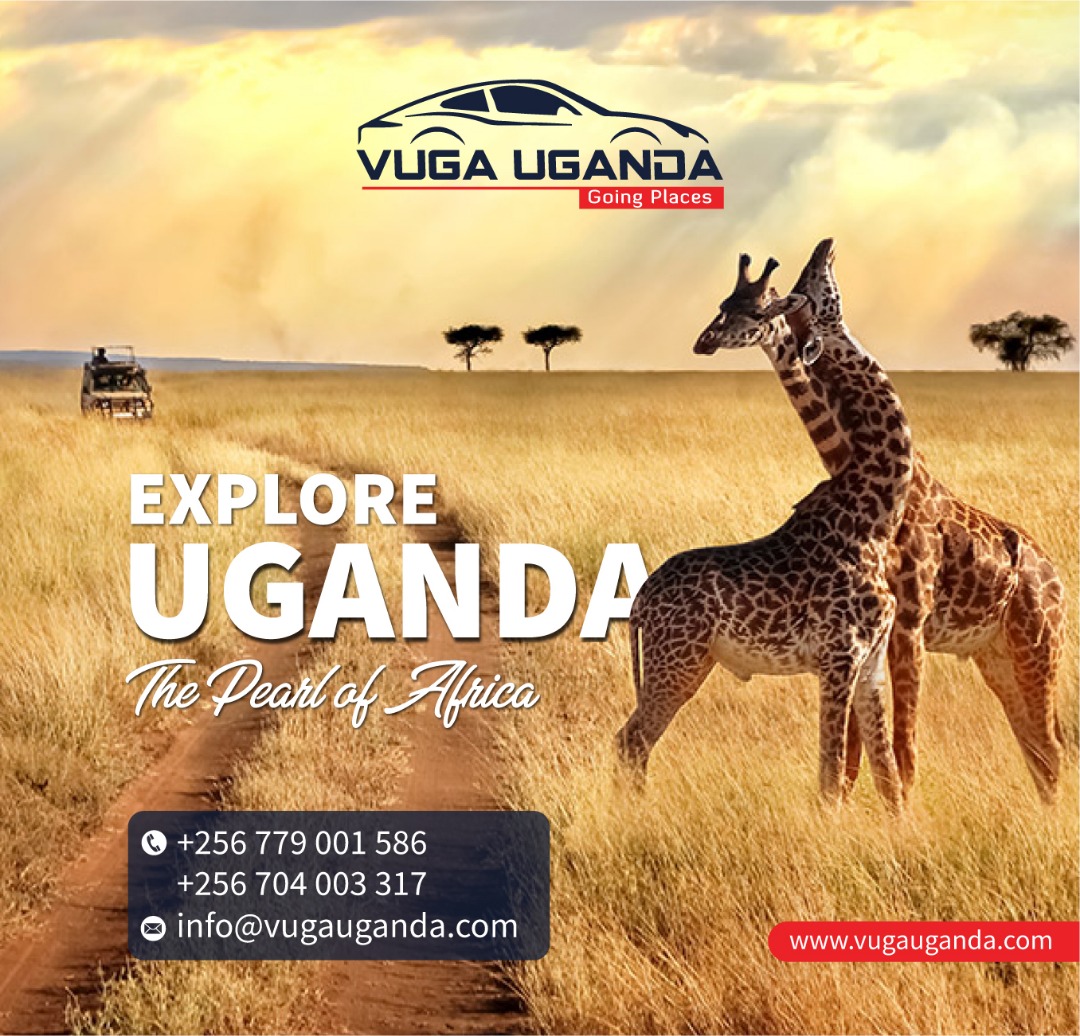